Rewarding The Enemies of God 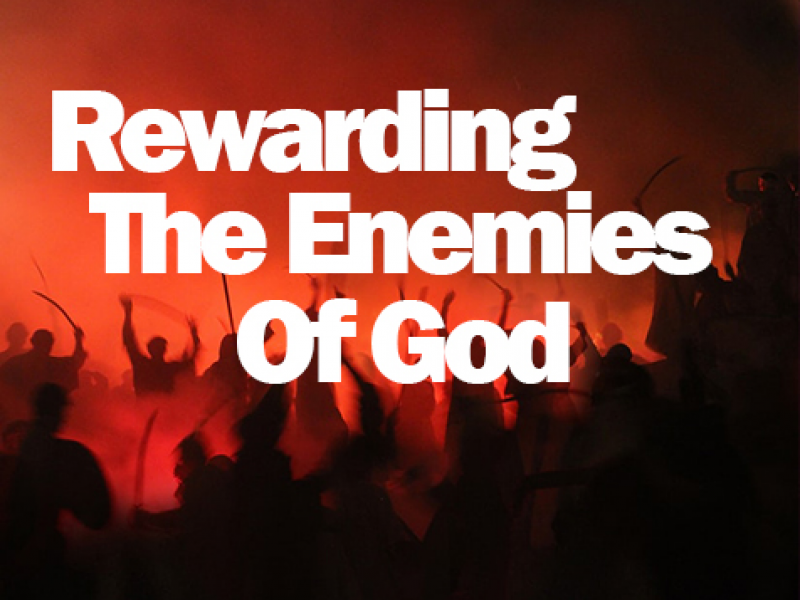 Luke 21:11 & 2811 And great earthquakes shall be in divers places, and famines, and pestilences; and fearful sights and great signs shall there be from heaven.28 And when these things begin to come to pass, then look up, and lift up your heads; for your redemption draweth nigh.God has warned us through the Prophet of the things that we are seeing happening all around us. The Message has all the answers to the condition of the world today. The world has become a global village of incurable diseases, pestilence, famine, climate change, global warming, wars and rumours of war.Luke 21: 25-26 There shall be signs in the sun, and in the moon, and in the stars; and upon the earth distress of nations, with perplexity; the sea and the waves roaring; Men's hearts failing them for fear, and for looking after those things which are coming on the earth: for the powers of heaven shall be shaken.All these disasters were not to affect the Elect but they are a reward to evil doers. During this time the Elect is rewarded with a Rapture! The plagues are a reward to evil doers at the time of the reward of redemption to the Elect! We will not be hurt by these end time plagues. Be not afraid of the viruses.Luke 21:18 & 19 But there shall not an hair of your head perish. In your patience possess ye your souls.As it was in the days of Noah and in the days Lot and in Egypt, so will it be now. The Elect was not destroyed with the ungodly. There were no plagues in Goshen. God put a difference! The Death Angel had to pass over the houses of the Elect! The Blood was a Token of safety! The message of applying the blood was the requirement of the hour which was above the Abrahamic Covenant! The Token was above the Covenant! So is it today. The Message is the requirement of the hour. It is the Token which is above the Covenant of just having a Christian confession! Covenant Jews would still perish if they did not apply the blood! A Christian today without the Token of God's requirement of the hour will still perish!The destroying angels in Ezekiel were told not to destroy those with the Seal. Fear not little flock the waters of the Red Sea will not close in until the weakest member of the Bride Body of Christ has crossed over into safety. These incurable are targeting those that fight against Jerusalem.Zechariah 14:12 And this shall be the plague wherewith the Lord will smite all the peoplethat have fought against Jerusalem; Their flesh shall consume away while they stand upon their feet, and their eyes shall consume away in their holes, and their tongue shall consume away in their mouth.The Bride is protected by a greater protection than sanitizers, gloves and masks. We have Supreme Rainbow Protection of the Holy Spirit from the blood of the Lamb.2 Peter 2:9 The Lord knoweth how to deliver the godly out of temptations, and to reserve the unjust unto the day of judgment to be punished:Psa 105:14 & 15He suffered no man to do them wrong: yea, he reproved kings for their sakes;  Saying, Touch not mine anointed, and do my prophets no harm.Let us rejoice because these evil things are a reward to the enemies of God, those without the seal of God. Apply the Token and be safe in the Goshen of today, the Message of the hour!Revelation 9:4 And it was commanded them that they should not hurt the grass of the earth, neither any green thing, neither any tree; but only those men which have not the seal of God in their foreheads.We are being rewarded by a Rapture which can be any time now! The judgement of the enemies of our God gives way for God to reward His servants the prophets, and the saints, and them that fear His name. So do not be afraid children, only look up for your redemption is very near at hand! Soon and very soon we are going to see the King! The enemies of God will be seeking a place to hide from the wrath of the Lamb. But we are saying, Even so come Lord Jesus!Revelation 11:18 And the nations were angry, and thy wrath is come, and the time of the dead, that they should be judged, and that thou shouldest give reward unto thy servants the prophets, and to the saints, and them that fear thy name, small and great; and shouldest destroy them which destroy the earth.Revelation 6:16 And said to the mountains and rocks, Fall on us, and hide us from the face of him that sitteth on the throne, and from the wrath of the Lamb:Revelation 22:20 He which testifieth these things saith, Surely I come quickly. Amen. Even so, come, Lord Jesus.60-0709 - God's Provided Way Of Approach To Fellowship.101 How we thank Thee, that in this great hour, that when all hopes of mortal life has finished… Atomic bombs are laying in hangars, hydrogen bombs, sickness and diseases, germ warfare… O God, and everything the way it is, knowing that the Bible said that man would actually rot in their flesh… But that Angel was given commission, “Don’t you touch any of those! Don’t you come near those who has the wine and the oil. Don’t touch those who has the seal of God upon their forehead.”And we realize that the baptism of the Holy Ghost is the seal of God.